It's been a hot minute since I've posted anything, and there are reasons. These reasons may or may not be related to the: "critically acclaimed MMORPG Final Fantasy XIV, which has a free trial, and includes the entirety of A Realm Reborn AND the award-winning Heavensward expansion up to level 60 with no restrictions on playtime!"

I mean what did you expect, I'm using the alias mashedpopoto.

On a more serious note, I do sincerely apologise. Life has been a bit hectic, and the aforementioned reason is at the very least half true. Nevertheless, the itch to shoot has come back and I assuredly will begin creating content again. Because while the posts have stopped, my debilitating habit of impulse buying plastic butts has not. And we have quite the backlog…

and yes, some of these figures are already released. Due to COVID however, I've had to go through a number of shipping delays, upwards 2-3 months, Yikes.

I'm a simple man. I see a Kurehito figure, I buy. Now if you read my bio, then you'll know my first figure was GSC's Utaha-senpai. From there, I've been collecting EVERY Saekano figure (or trying to), which probably isn't wise because they don't seem to stop making them. Send help.

I've been waiting a long time for this one. Unfortunately as of the writing of this post, I'm still waiting. For those unaware, Iida Pochi is a mangaka and now v-tuber who's responsible for the Ane Naru Mono and Okaasan-online series. But all you need to know is her work radiates big ara-ara energy, and I'm all for it. Especially this one.

The Elf Village series has been pretty great so far, and I have a feeling this one is not going to be the exception. After all, Kukuru is based on an OC by none other than Mataro. Other than my obsession to "catch them all" when it comes to a series of anime figures, this figure doesn't make it difficult to preorder. I mean, look at her bo-… I mean blue bird and as-… I mean axe…

Pink hair? Check. Expressive eyes? Check. Dynamic pose? Check. This one was a pretty easy pre-order for me even though I wasn't too familiar with Ito Life. Apart from checking boxes, the figure itself is just really cheerful (maybe because she's a cheerleader mashed you dumbass), and I dig that. Hope this one turns out well, and Mr Ito gets more figures from his work.

I'm going to straight up admit that I haven't played Girls' Frontline, and I don't intend to. Nothing against the game or anyone that plays it, I'm just not a mobage guy. Nevertheless, I am figure collector. And this was one I could not ignore. I've always found the whole "inanimate object of significant" turned into an anime girl trend kicked off by KanColle really interesting, and its seems to work pretty well with guns.

You should know my tastes by this point in the article so I won't repeat myself. I guess I should also probably note that I would not have pre-ordered this if not for Wonderful Works' work (heh) on Ryza, so let's hope they can keep it up.

Ban's work is known for a certain… feature not commonly seen in other illustrations or figures. Here, we see his idea of a casino dealer, accompanied by a pretty extravagant "ROCKET BOY" base. As I am a fan of Rocket Boy, this is not a bad thing. I missed out on getting Rocket Boy's Dva (another Ban figure) back in the day, so I sure as hell ain't missing out on this one.

You know how I said I try to collect every Saekano figure? I am a man of my word. Honestly though, this one doesn't seem to evoke Utaha-senpai's allure compared to some of her other figures :( Still gotta get her though, since it would be criminal to not display the trio as a set.

There are two kinds of people in this world. Those who have a cheerleader anime figure shelf, and those who don't. Now, you may say: "But mashed, her breasts are bigger than her head". And to that, I reply "You're not wrong". This figure being based on a Mataro illustration and being manufactured by Rocket Boy tipped the scales for me, but let's see how the final product turns out.

By the Gods! I can't believe it took this long to get to a SkyTube figure. Don't you worry, I'd never forget our Lord and Saviour SkyTube. This figure in particular is pretty interesting, namely the fact that her Japanese title is "Siberia Samuke Danchou", or "Siberia Chills Captain". A pretty fitting title, as I assume things would be quite chilly in her outfit. I definitely get Valkyria Chronicles vibes from this one, thanks Mataro.

Yes, another figure from Elf Village. This time, she's a dark elf with a rogue/arabian theme. Really like the translucent parts here and pose, so she's going on the pre-order list.

I'm going to assume that Mimi is Yuu's sister, so you know I'm picking her up. You know what? Maybe I'll do a dual photoshoot/review. I guess there's some benefit to being late. Although, is two-years late pushing it?

Grass grows, birds fly- mashedpopoto preorders another Saekano figure. This time, another Megumi. From the prototype, I'd say overall execution of Kurehito's original illustration is excellent. She really does appear to be leaping out of the canvas, good stuff.

Welcome to October! September sure was stacked, wasn't it.

Here, we have another native figure based on an illustration by Mikoto Akemi. Now, I'm not going to pretend that I'm familiar with their art; I'm not. What I am familiar with however is good figures, and this one featured something I'm admittedly missing in my collection; megane. I actually love the colour palette here too, very neutral and easy on the eyes. Preordered.

At this point, I feel like a crack addict trying to justify my addiction. I think it speaks for itself, so I'm going to leave it at that. I guess I should comment on Izumi as a character in Saekano. Yeah, she's pretty cool. Doesn't really contribute much to Tomoya's circle, but act as moral support for their otaku activities.

Is it just me, or has Mataro gotten A LOT of figures in the past few years? Eh, not that I'm complaining. Here we have one titled Summer Memories, which is an apt title all things considered. Perhaps Mataro should have opted for Summer Mammaries? (I'll show myself out).

I'm sure you're familiar with the whole #FUCKONAMI fiasco from back in the day, in response to their… outlandish business practices toward some of their IPs widely known by western audiences. I'm not going to go into a long discussion piece about this because this is neither the time nor the place, but know that KONMAI still makes some pretty interesting stuff for their local audience, in arcades more specifically.

Case in point; this figure of Grim Aloe from their Bombergirl and Quiz Magic Academy series of arcade games. A succubus cheerleader somehow is exactly what I'm missing in my collection, so this one is getting preordered.

Considering my fondness for Alter's Plachta figure, I couldn't of course ignore this figure of the main protagonist, Sophie. Super cute and detailed figure, can't wait for this one (which is almost guaranteed to be delayed). Look at that staff. Look at that flask.

After Hurdle Shoujo, I knew Kekemotsu wasn't someone to be slept on. And based on this particular figure, I think this idea is going to be cemented - just like the block she's sitting on!

Ah yes, another Saitom figure. I unfortunately had forgotten to preorder Stella from this series of devil girls and fashion, so Luphia will have to do as the second in the series. The sculpt and outfit of this figure is pretty unique, and I'm a sucker for shiny down jackets.

Oh boy, here we go again. Apparently Asanagi is so cool he gets two figures in the Elf Village series!? (The previous being Priscilla). With a sculpt by LESLyzerosix, you already know this one is going to be super detailed and aesthethicc.

Michiru gets a chair compared to the rest of her Saekano sisters. She'll look great next to Izumi!

The second in Good Smile Company's Saekano series of figures based on the blu-ray covers for Saekano fine, with the first being Megumi in her "First Meeting Outfit". Once again, there's no way GSC could botch this one up, so its a safe preorder.

Ping-Yi, Jin-Lian, Chun-Mei, Dai-Yu. Ring a bell? If not, then I implore you to check them out. These are figures based on Tony Taka's illustrations of various "Instrument girls". I can't exactly recall the historical basis, but they're some of the best lewd figures ever made. And I happen to own all of them so far, so there's no reason I'm going to miss out on Bao-Chai.

You know how I mentioned the whole KONAMI thing before? Well. Case in point, here is Sepia Belmont; a character from the Bombergirl series. If you're somewhat familiar with Castlevania, then the name Belmont might sound familiar. I'm not sure how hardcore Castlevania fans might feel about a character like this being based off the Belmonts, but I don't think it's positive. Me? I think you already know. One detractor for this figure though, is its price. She's very expensive :(

For some reason, I actually own quite a few Azur Lane figures now, despite never having played the game (you know my stance on mobage). Nevertheless, I'm going to say its because the character designs are pretty great. And this one thicks a lot of boxes, it being made by Alter pushing me over the edge.

Yes, another Momi figure! This one in particular is pretty great, because she's sitting on a coffee table, as per Momi's original illustration. Mirror base for a reason! Oh, and I need more maids in my collection, don't judge.

How appropriate that we're closing this preorder outlook with a Mataro figure, SkyTube no less. For those unaware, a "Gal" or ギャル (gyaru) is a Japanese fashion subculture popular with women back in the day, and JK stands for Joshikousei (女子高生), which directly translates to high school girl. I'll let you fill in the dots.

And there we have it, the end of my first preorder outlook. Will I end up preordering more figures? Probably. Here's to more posts and content!

Shoutout to Tier over at Tentacle Armada for not only being an inspiration for not only this style of post but a lot of my own work. 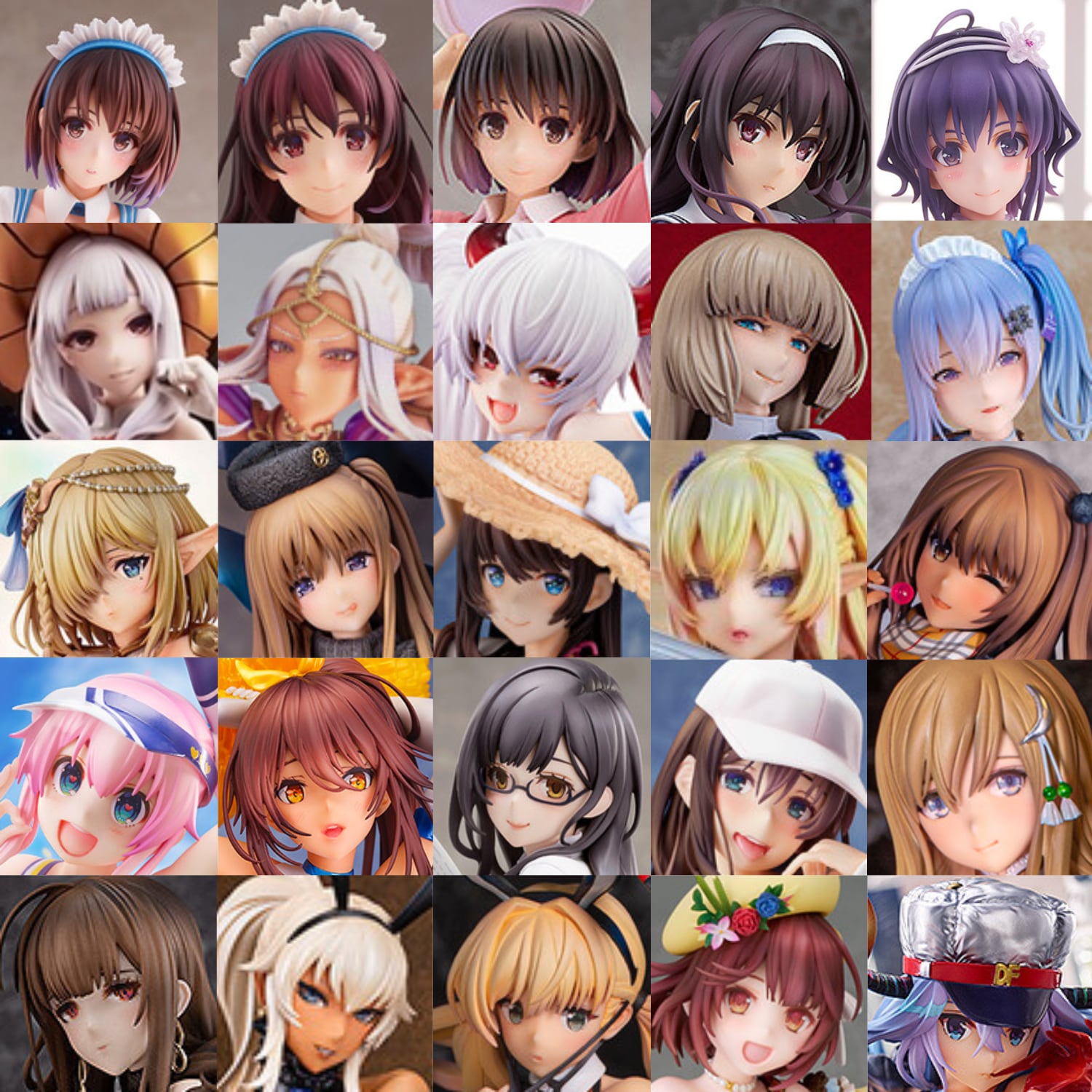