Dream of the Red Chamber is widely known as one of the masterpieces of Chinese literature, forming one of the "Four Great Classical Novels". You're probably aware or at least have seen works influenced by these—does Journey to the West (Dragon Ball) or Romance of the Three Kingdoms ring a bell?

As a work of literature, Dream of the Red Chamber is widely considered to be greatest of four, and for good reason—having a wide and truly epic scope that follows the rise and fall of the Jia clan during the Qing Dynasty. Because the novel provided precise detail into the life and society of 18th Century China, it's influence on consequent works is seminal!

Fast-forward to the present, and Tony Taka has decided to illustrate some of the women from the novel. SkyTube have actually already released a number of figures from this series of illustrations, which I will (eventually) get around to reviewing, or doing a roundup at the very least.

Dai-Yu is based on Lin Daiyu—one of the Twelve Beauties of Jinling.

Since this is the "Deluxe" version, she comes with two different configurations, one with an Erhu (Traditional Chinese Violin), and one holding some very striking fans.

For your information, the Erhu is the instrumental string instrument in traditional Chinese music, and you've definitely heard it before. It's honestly pretty under-appreciated in my opinion, but I'll stop myself before I go into a essay about why the Erhu is so great (I totally didn't listen to Erhu music while writing this review >.>)

Hope you liked it! I might keep doing these animations as part of wider project, please look forward to it. Anyways, we've rambled for more than enough—let's get this show on the road.

Standing at a scale of 1/6 and around 28.5cm. Dai-Yu is in my opinion, SkyTube at their peak. Yes, a bold claim to make considering that this figure was released back in 2020, but I stand by it. Let's take a closer look and find out why!

Starting with her Erhu configuration, SkyTube have done an excellent job conveying the innocence and elegance both present in Tony's OC and Daiyu's characterisation—also including a dash of lewdness as Dai-Yu's qipao wraps tightly around her braless breasts and hourglass waist whilst Dai-Yu's black pantsu is visible through her translucent black dress.

Compared to SkyTube's other figures based on Tony's OCs of Dream of the Red Orchestra girls, Dai-Yu is much less lewd—which we can see very clearly in this configuration.

Taking a closer look at Dai-Yu's face, we can see that the paint quality is very smooth, which carries over to her dress as well. The various butterfly and flower decals have been applied flawlessly alongside the creases in her dress, which really elevates the overall sculpt. If I had to criticise, the hair is satisfactory compared to other figures—although it has been sculpted quite well which covers up aforementioned paint quality.

Pivoting to Dai-Yu's hair bands for a moment, we can see the they also feature the same design elements as the rest of the figure, very nice.

Taking a closer look at that chest we mentioned earlier, SkyTube made a very conscious effort to ensure that Dai-Yu's nipples were visible, even in this clothed configuration. How very nice of them!

Moving to her side, we can also get a closer look the frilly bits on Dai-Yu's qipao. The use of the same translucent finish as her dress is an excellent detail! We're also able to get a closer look at the ponytails in her hair and the golden accent on her armbands, all executed very well and without any problems.

Moving towards her right hand, we're able to get a closer look at Dai-Yu's bow she's using to play the Erhu. The detailing on this prop is extremely well done, and features wood-grain paint alongside various other textured pieces. Should also mention her pink nails, which are a nice touch and make up the Triadic Colour Harmony present in this figure.

As for the Erhu itself, the detail remains consistent. Nothing much else to say here except good work SkyTube.

Zooming back out and panning downwards a bit, we get a closer look at Dai-Yu's luscious legs and her translucent dress. The star of the show here is clearly the translucent dress, and I love how it catches light/reveals her pantsu.

For effect, I've taken a shot with a light pointed directly at her skirt to emphasise it.

Finally, a closer look at her shoes. The choice of heels are definitely a more contemporary choice, which I'm not opposed to. An interesting tidbit here is the blue thing next to her feet. This is actually a magnetically attached stand for the Erhu, which can stand beside Dai-Yu in her second configuration...

As this is the Deluxe version, Dai-Yu also has a... lewder configuration—casting off her innocent look by opting for a shorter skirt, and a more salacious expression, as well as opting for two fans instead of her Erhu.

Talking about casting off—

What happened to the wholesome-3000-erhu-playing lass... But more importantly, WHERE DID HER TOP GO!?

I'm a big fan of how Dai-Yu's cast-off profile looks. The fan slightly blocking her face and her nipple maintains a slight semblance of shyness. The actual breasts themselves don't seem to feature a weld and have been sculpted and painted beautifully—having a more realistic shape (as opposed to the "bolt-on" fake breast look) and bright pink paint on the nipples.

The fan itself also has been executed very well, and the use of pink and gold are a beautiful contrast with the teal used in the rest of the figure.

As I mentioned at the start of this review, SkyTube at their peak.

Of course, Dai-Yu's pantsu can also be removed, revealing her shapely ass.

And before you ask, here's a close-up.

And some bonus shots with the wide-angle macro lens:

And that's all she wrote.

Overall, this figure is probably one of the best so far (in this series by SkyTube), only challenged by Jin-Lian (also one of the very best anime figures in my collection). I'm a big fan of Tony's work and Chinese dresses, so this series is like two peas in a pod for me. I hope you agree as well!

As an aside, thanks for getting to the end of this review. I'll probably be slowing down a bit on the posts again unfortunately due to some life changes, but rest assured the content will continue to flow.

Enjoy the rest of the shots and I'll see ya next time ;) 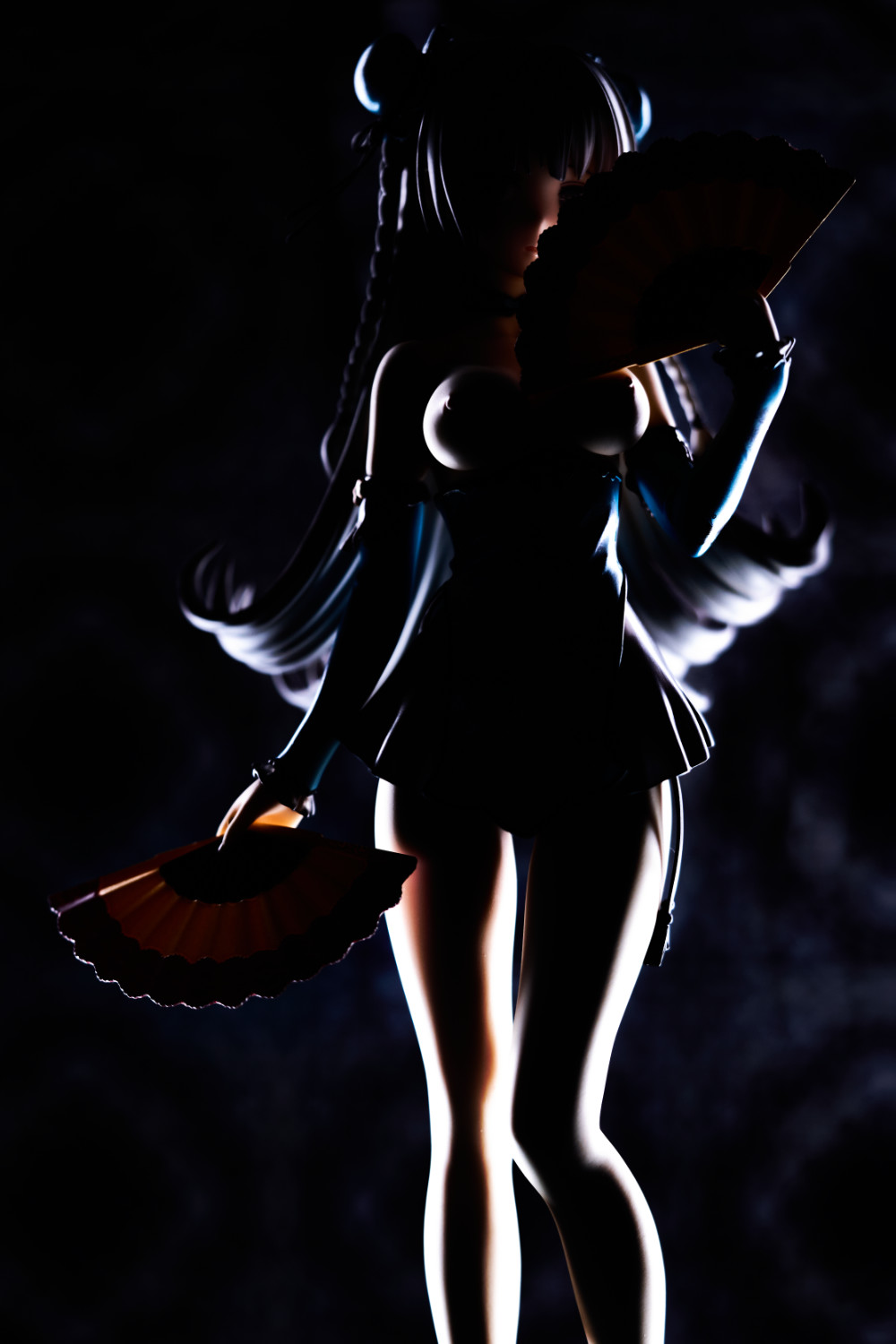 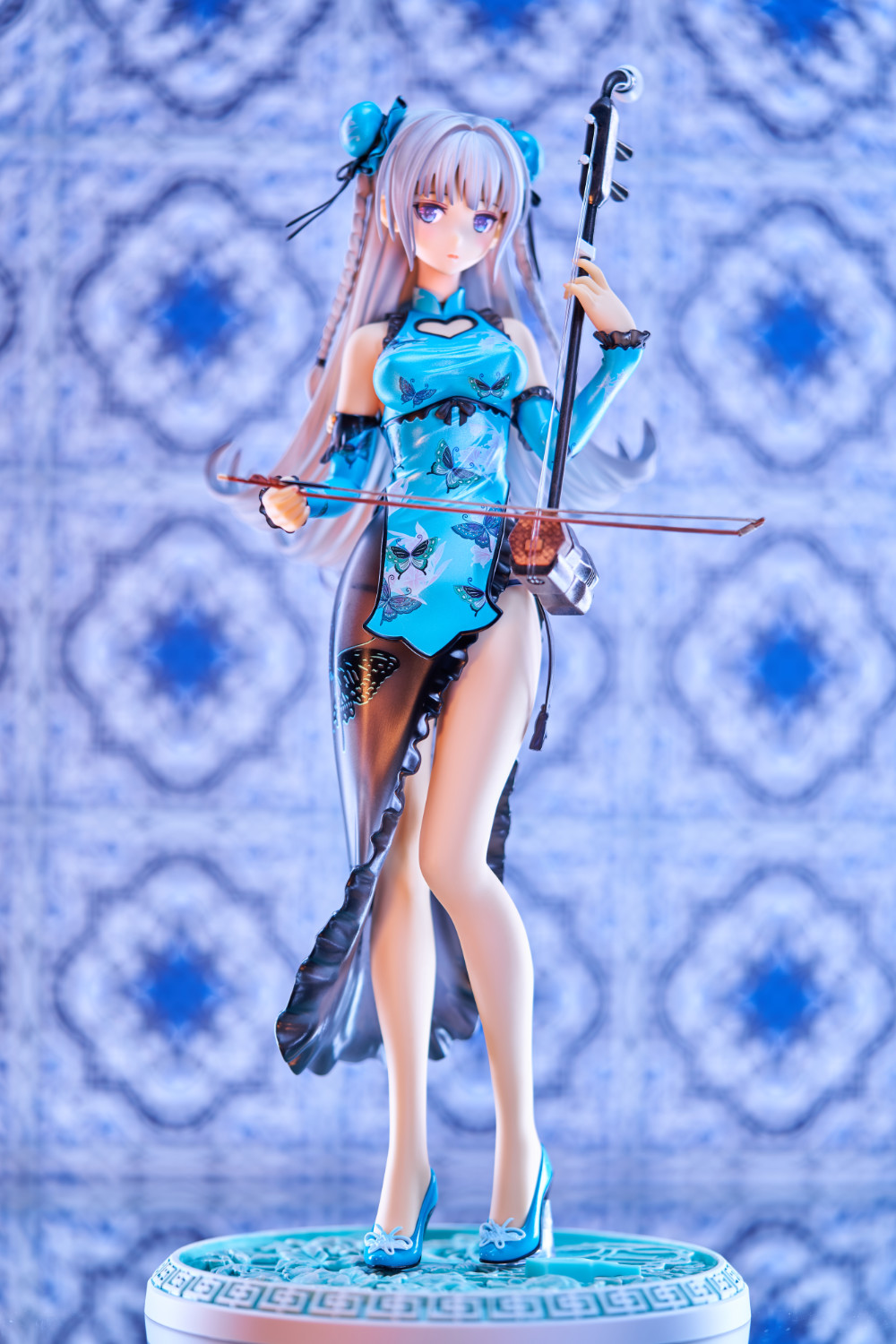 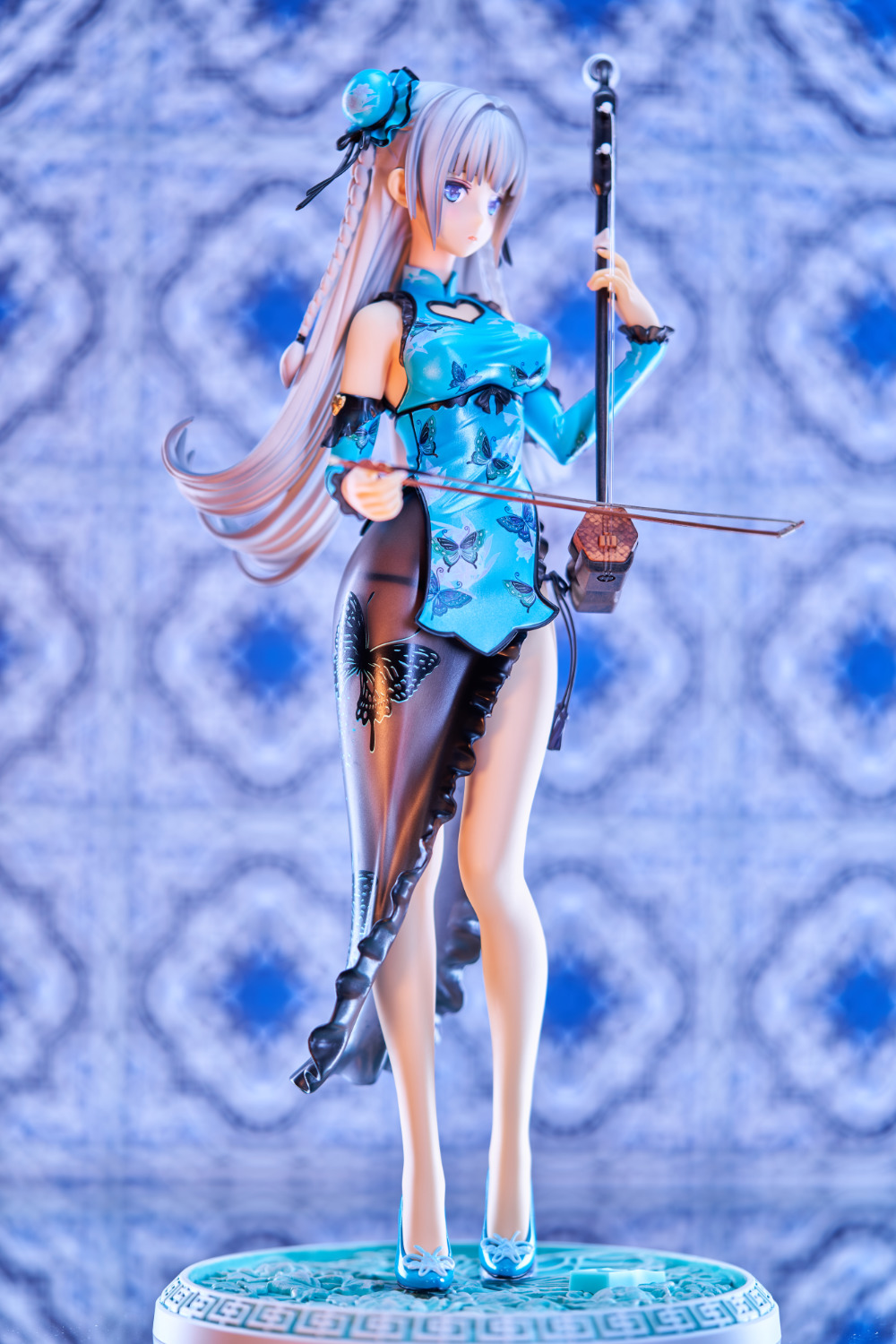 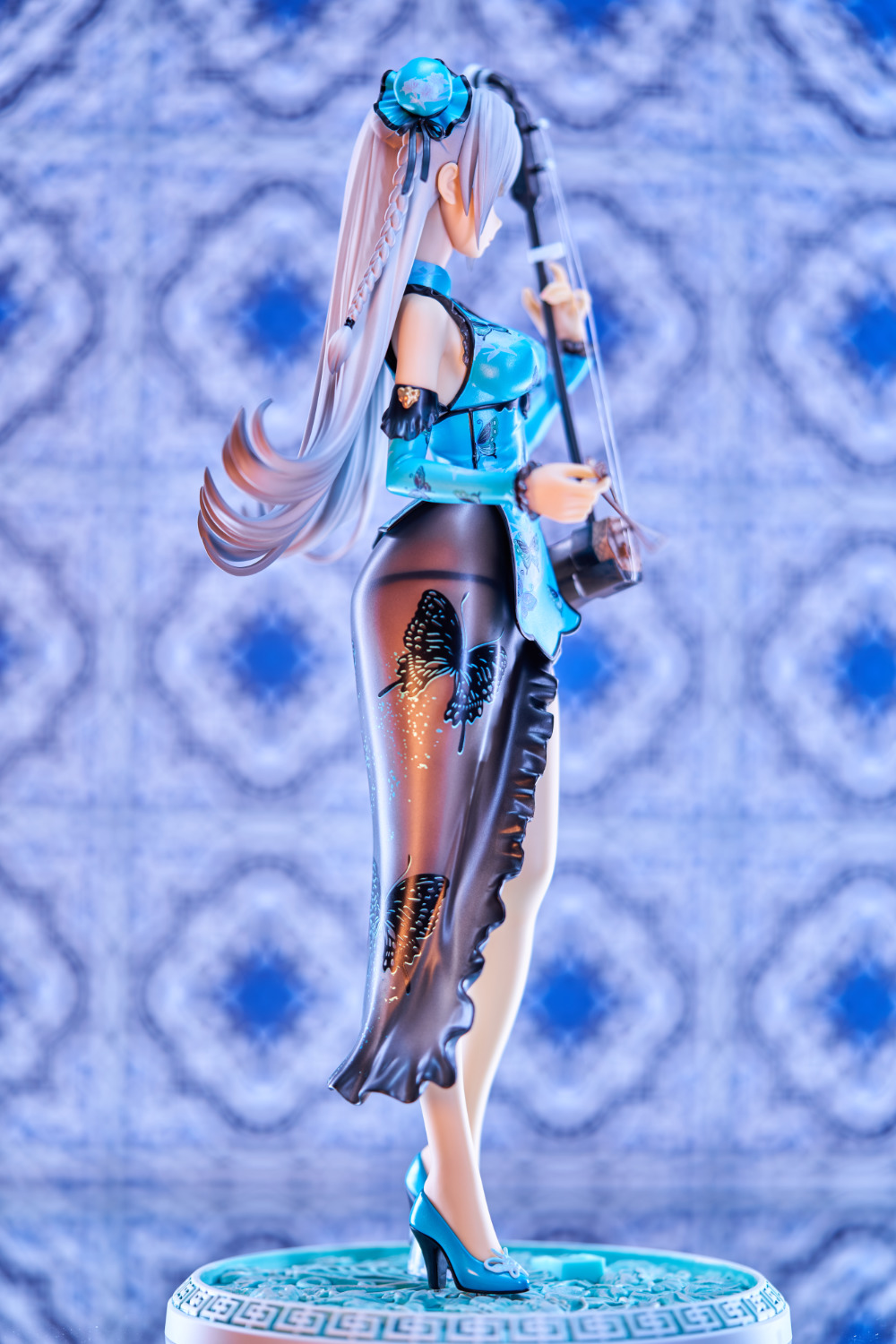 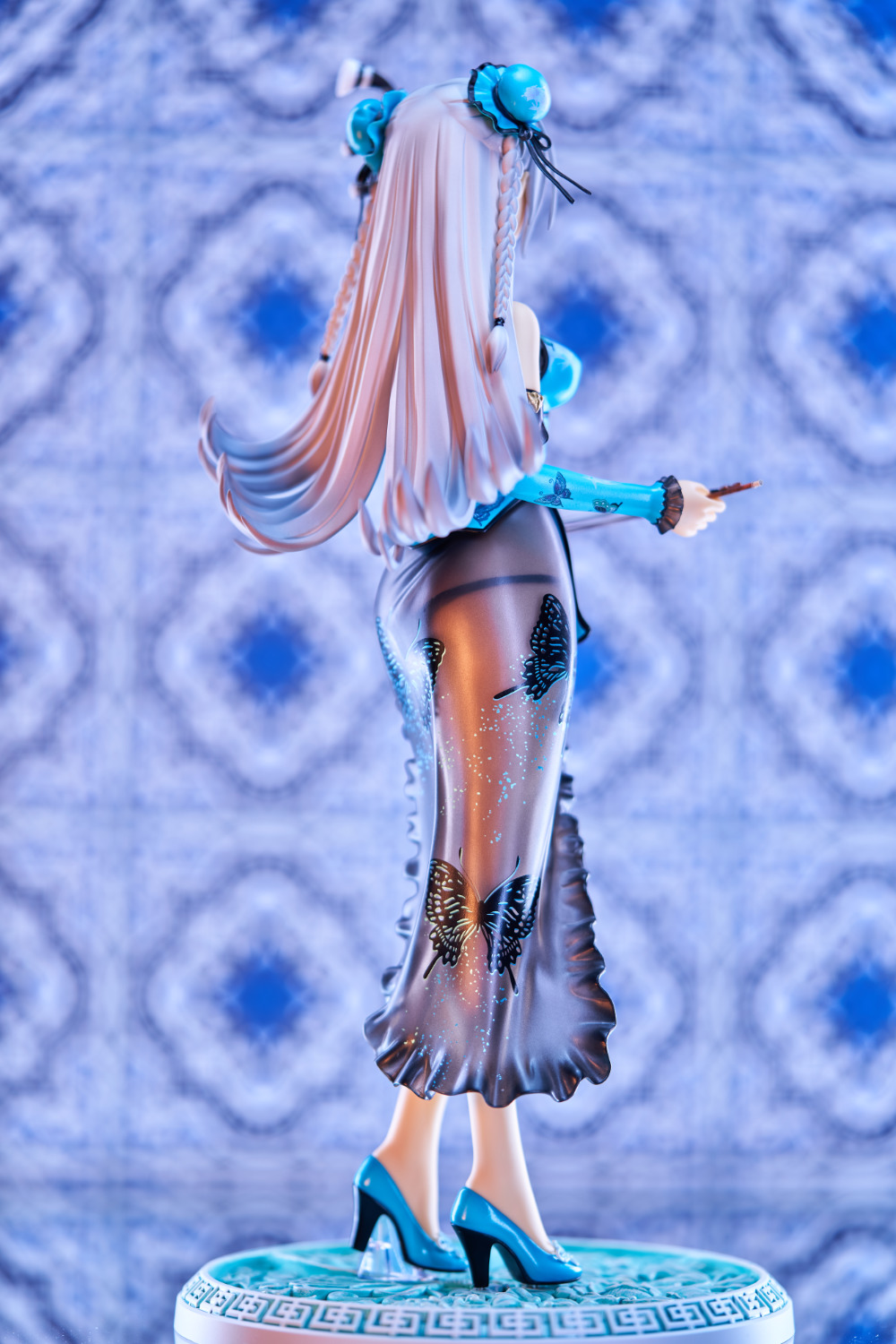 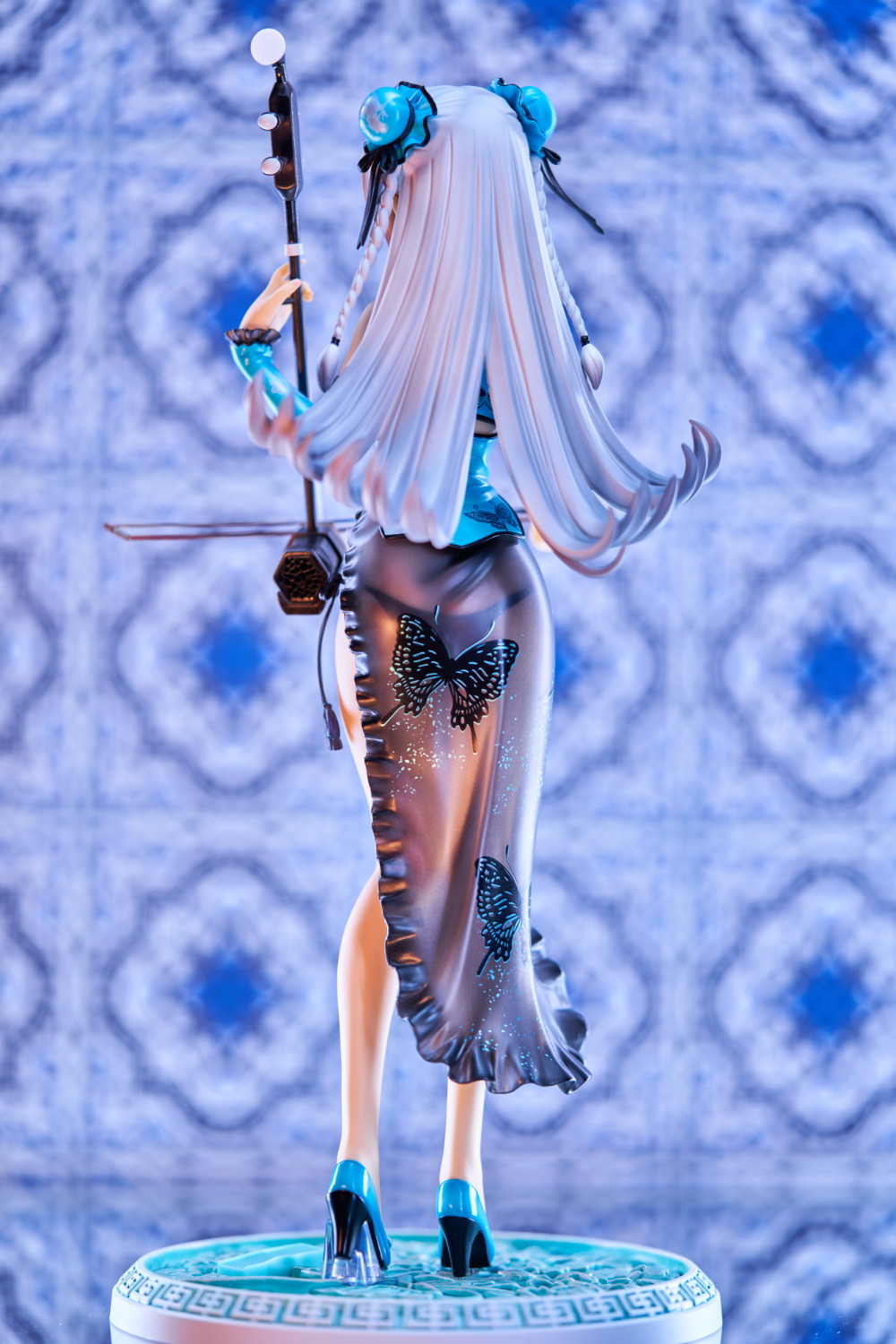 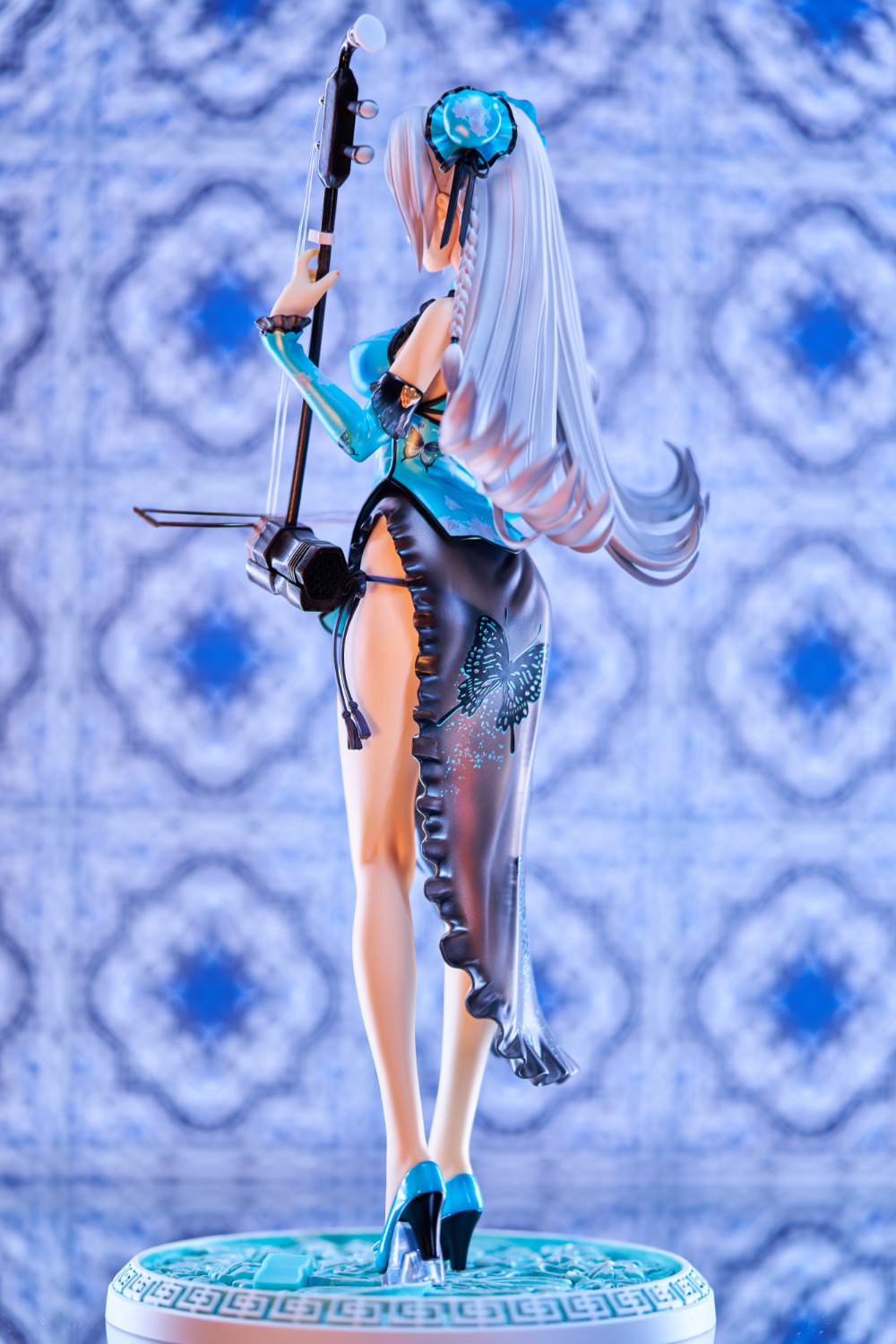 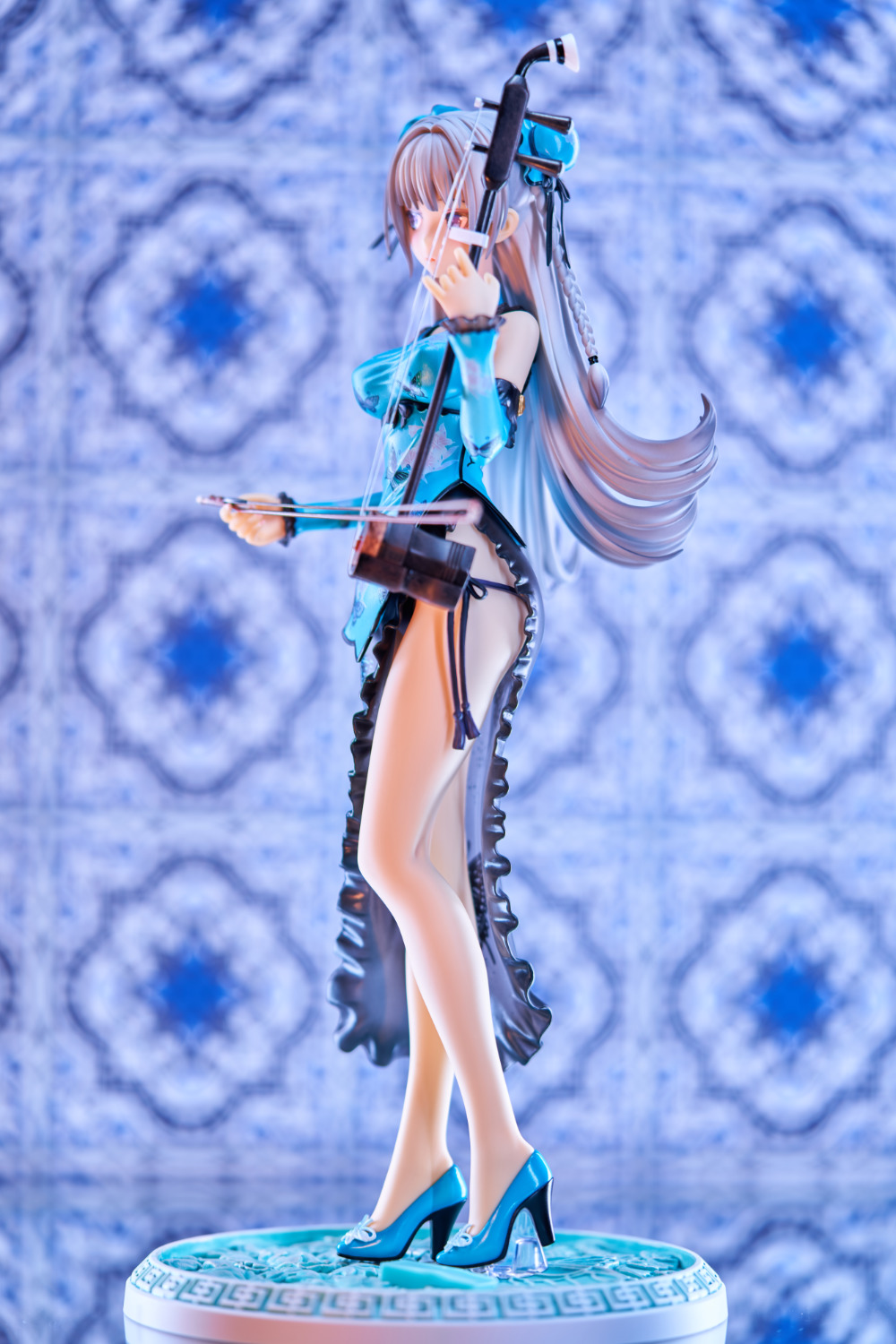 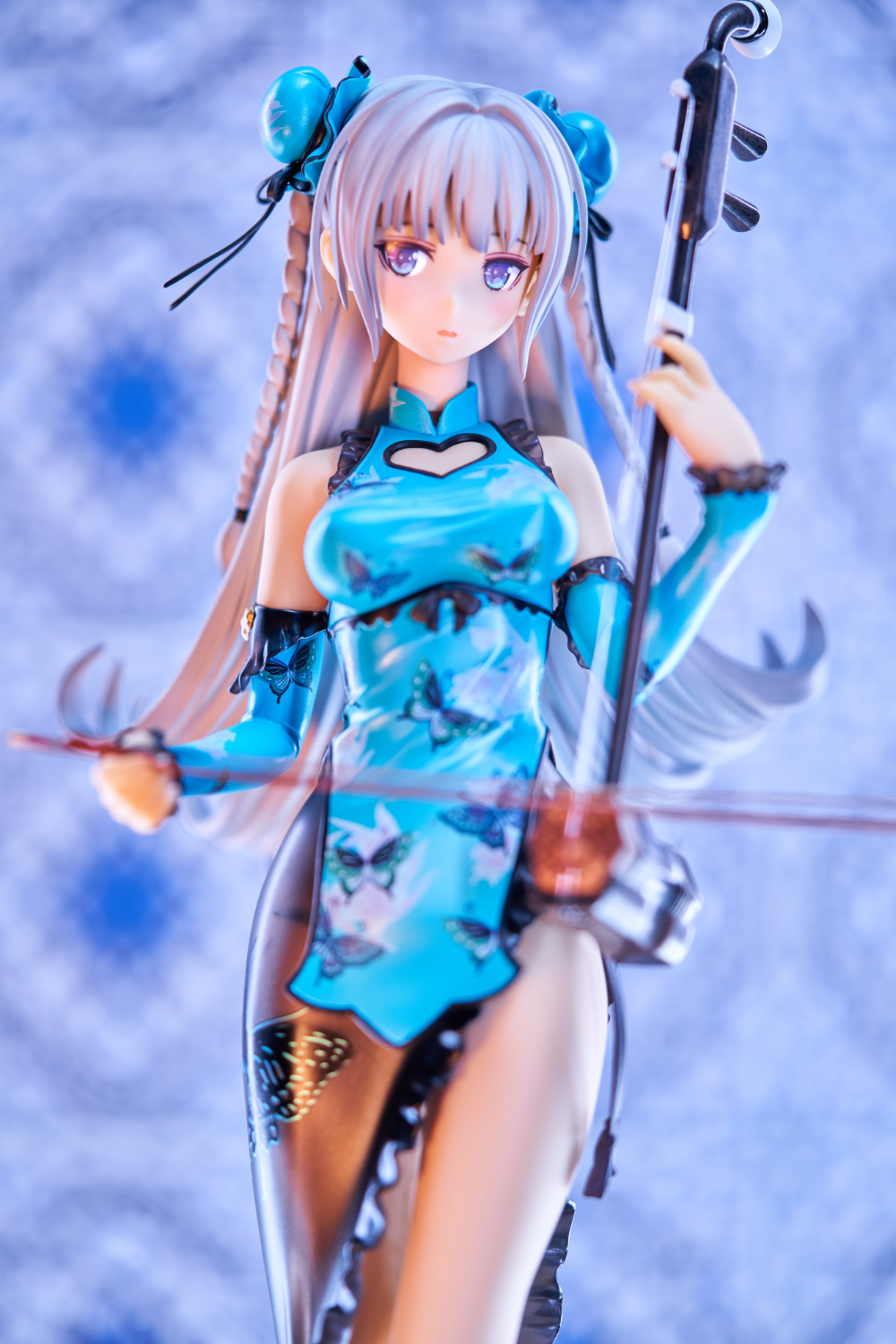 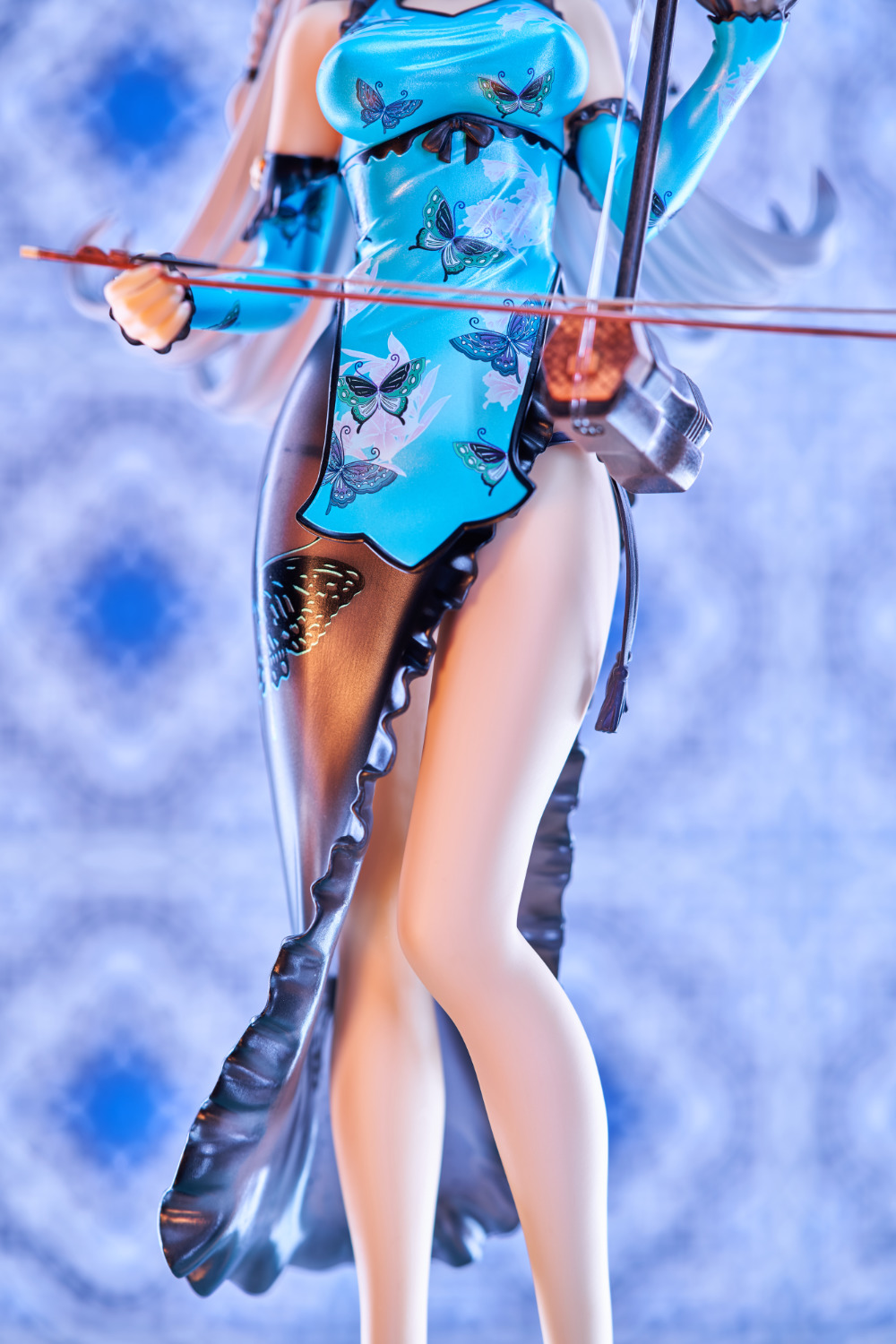 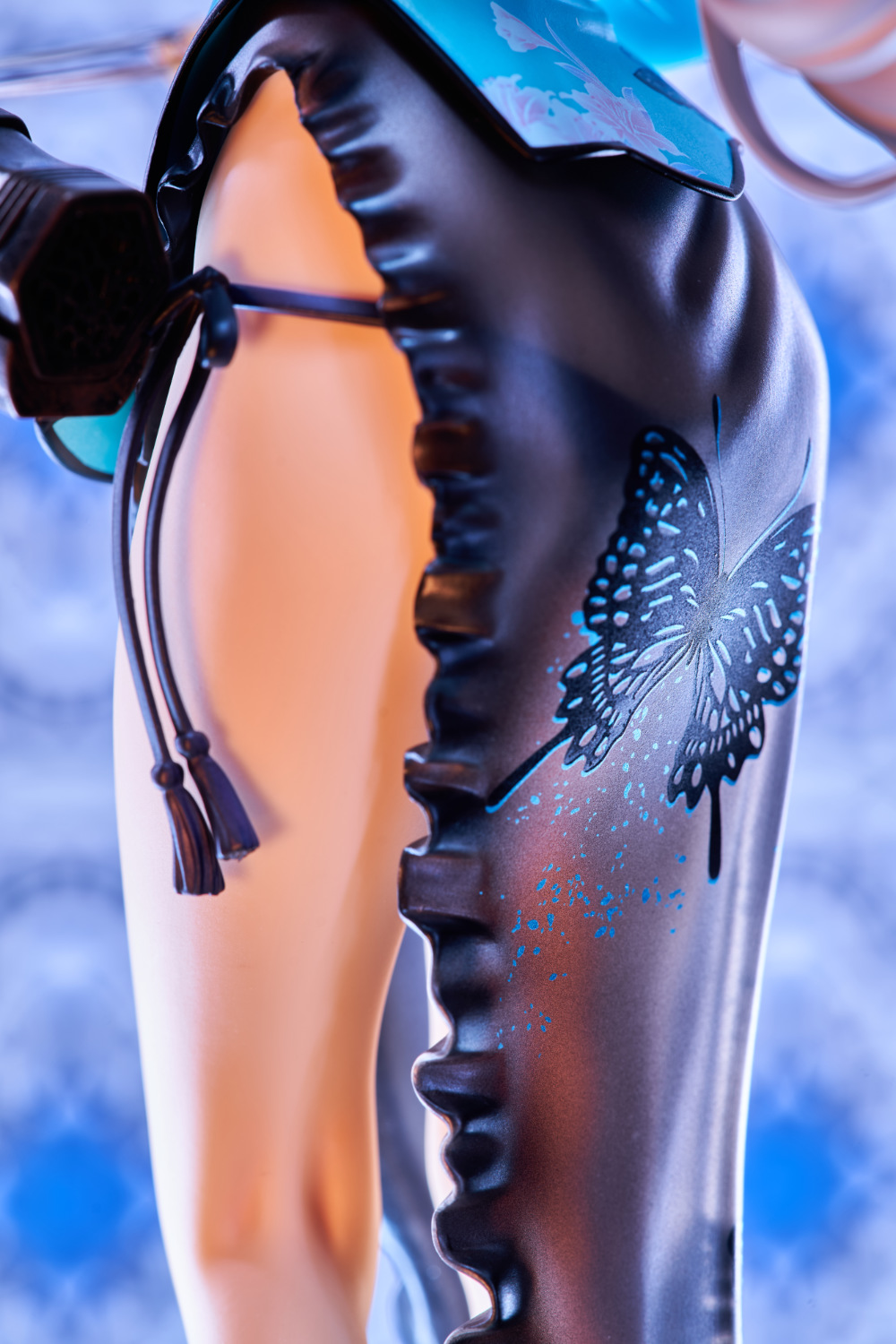 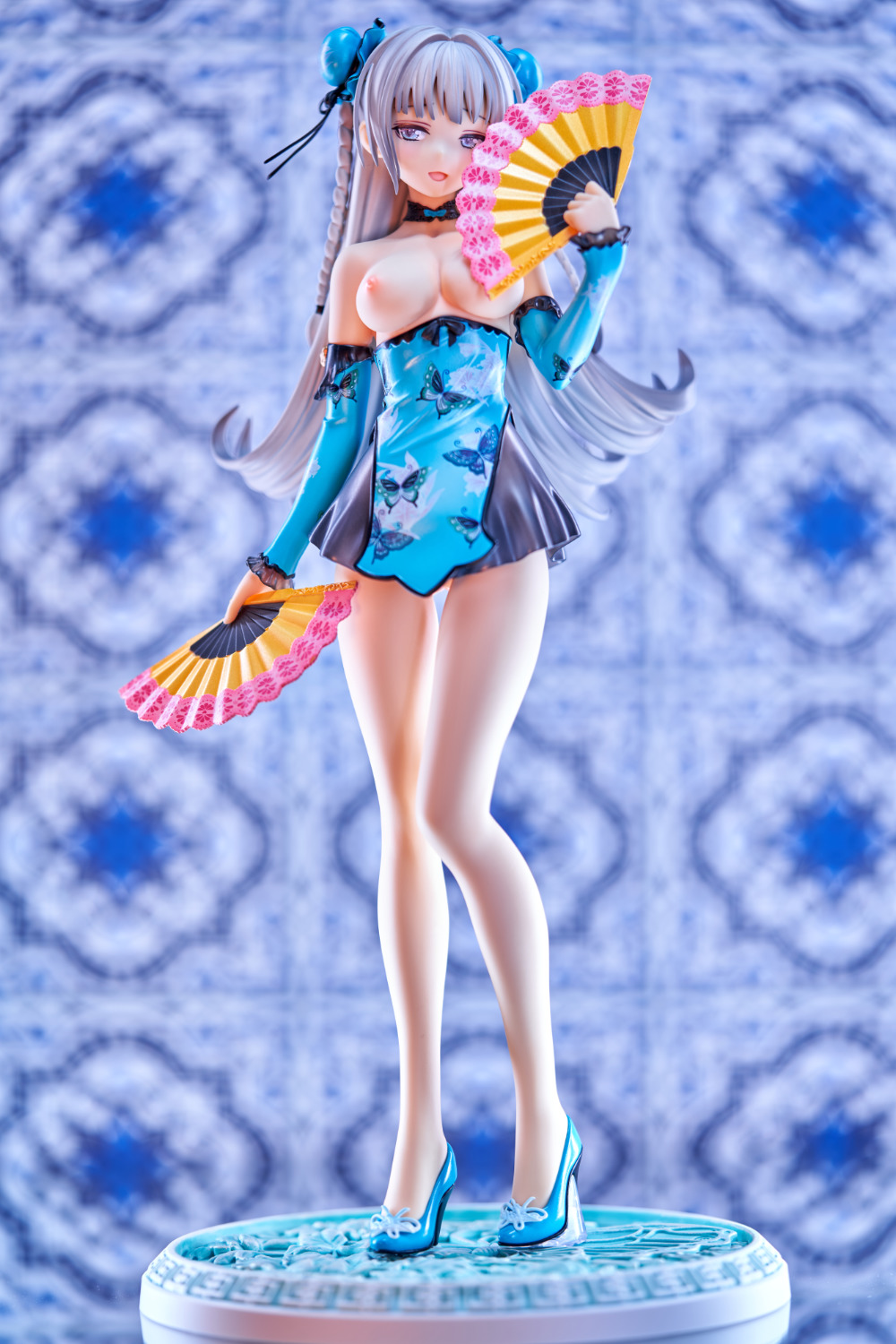 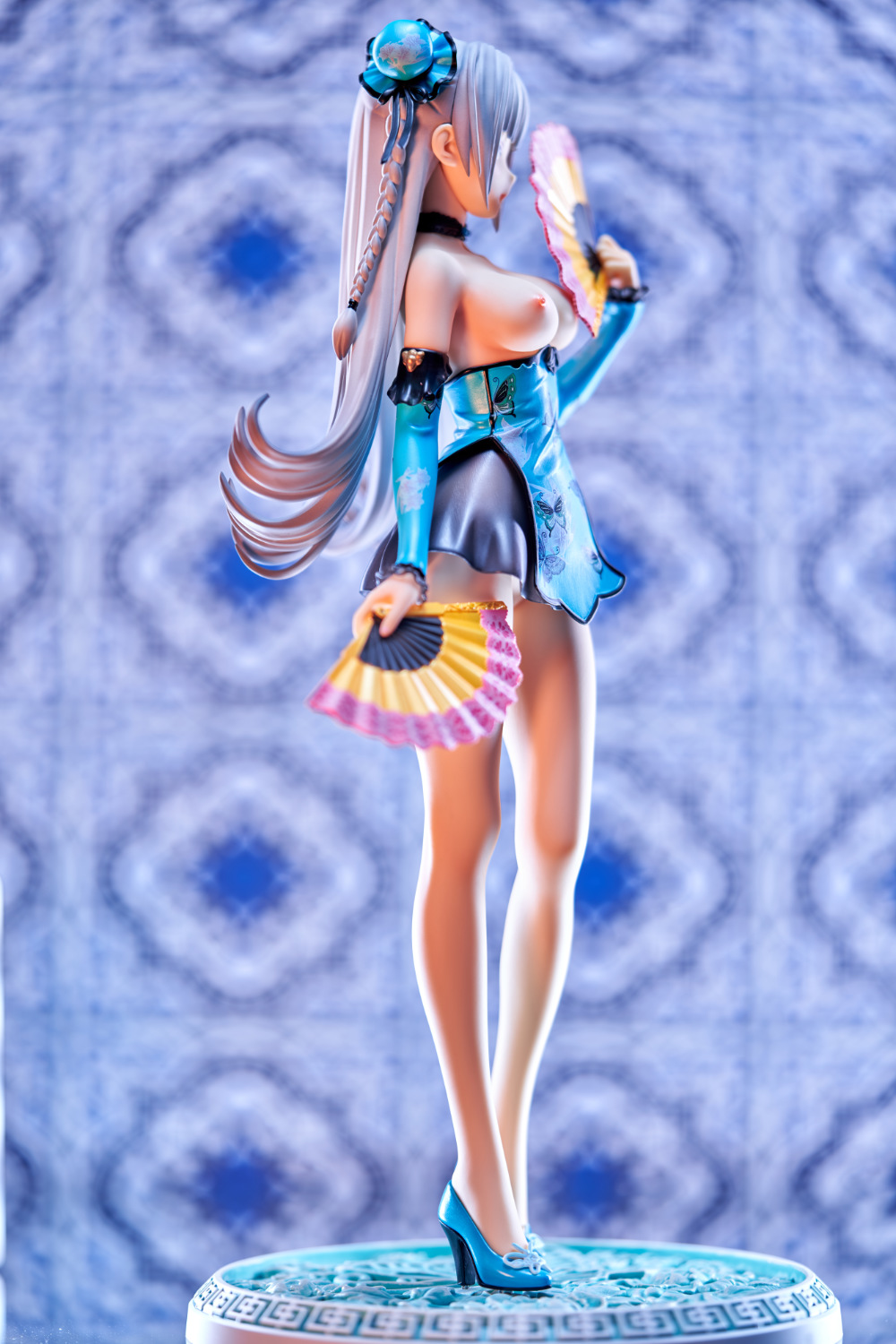 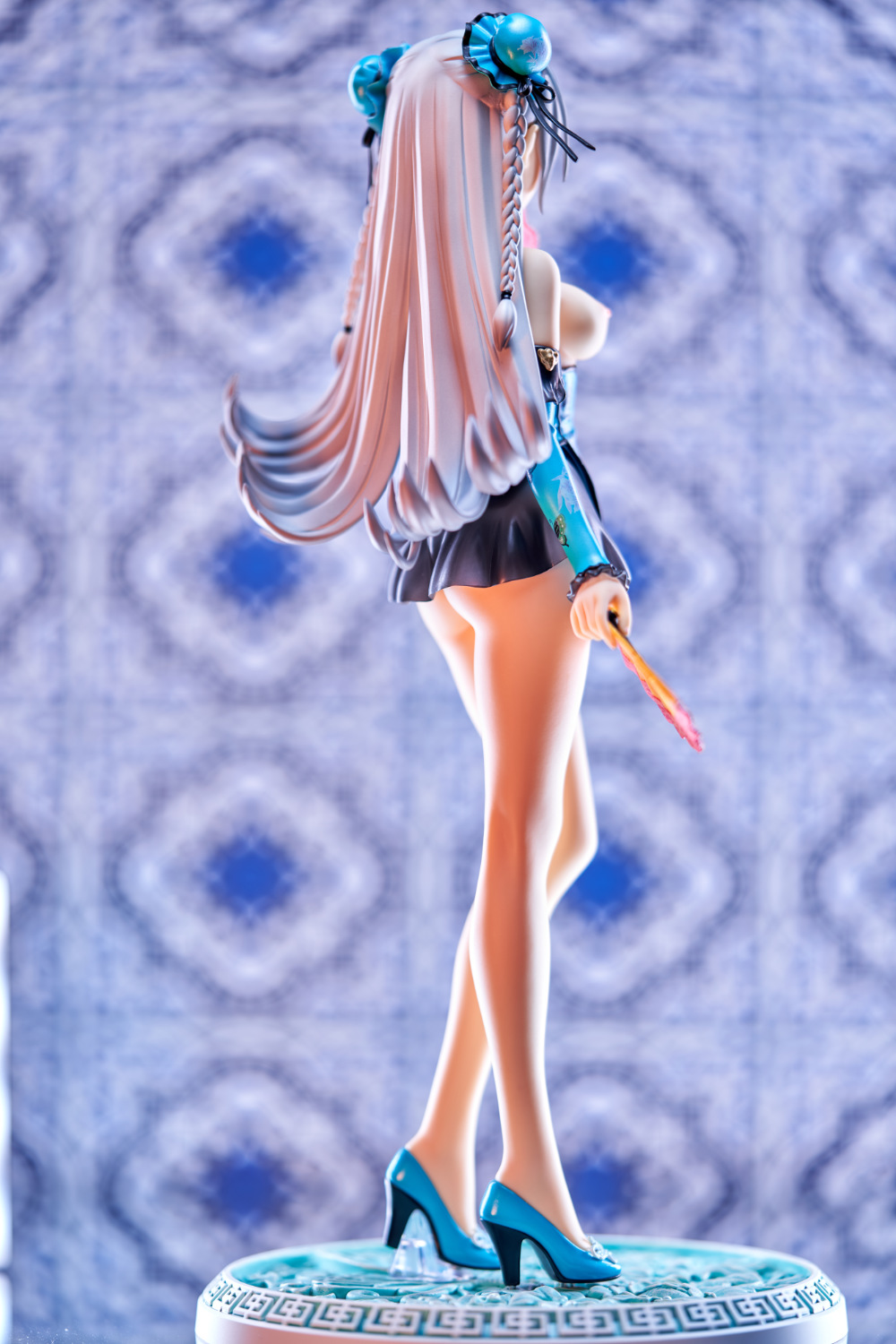 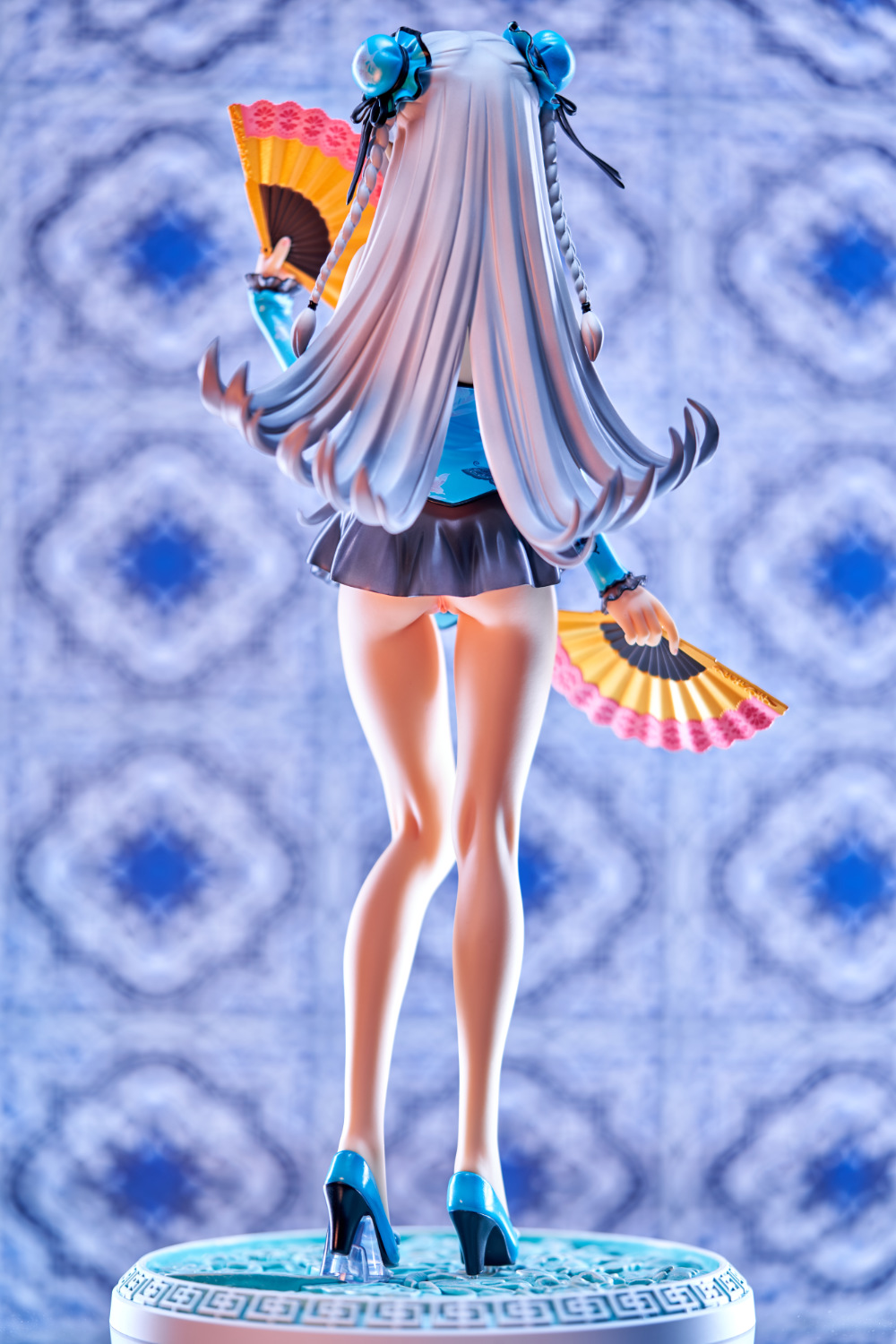 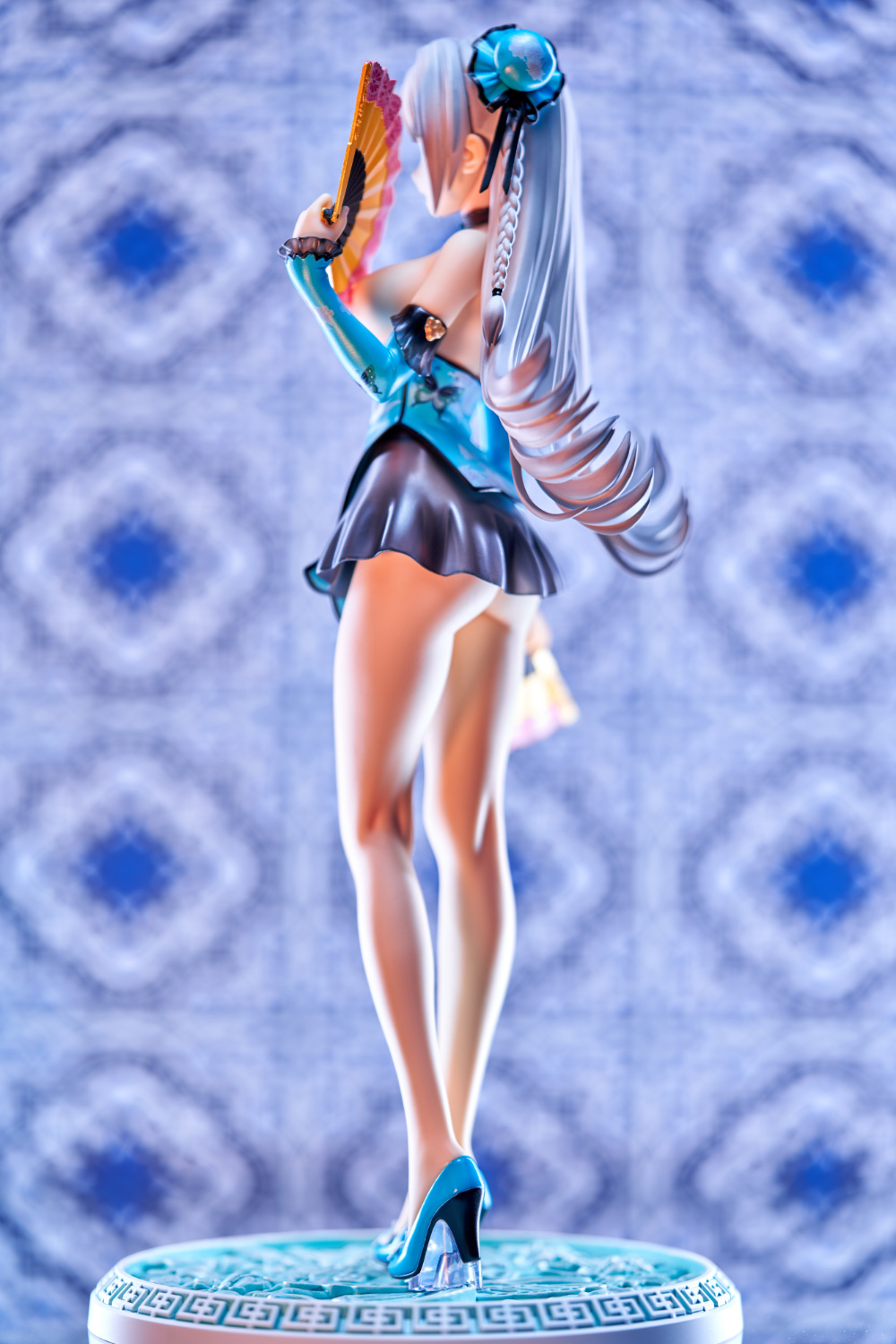 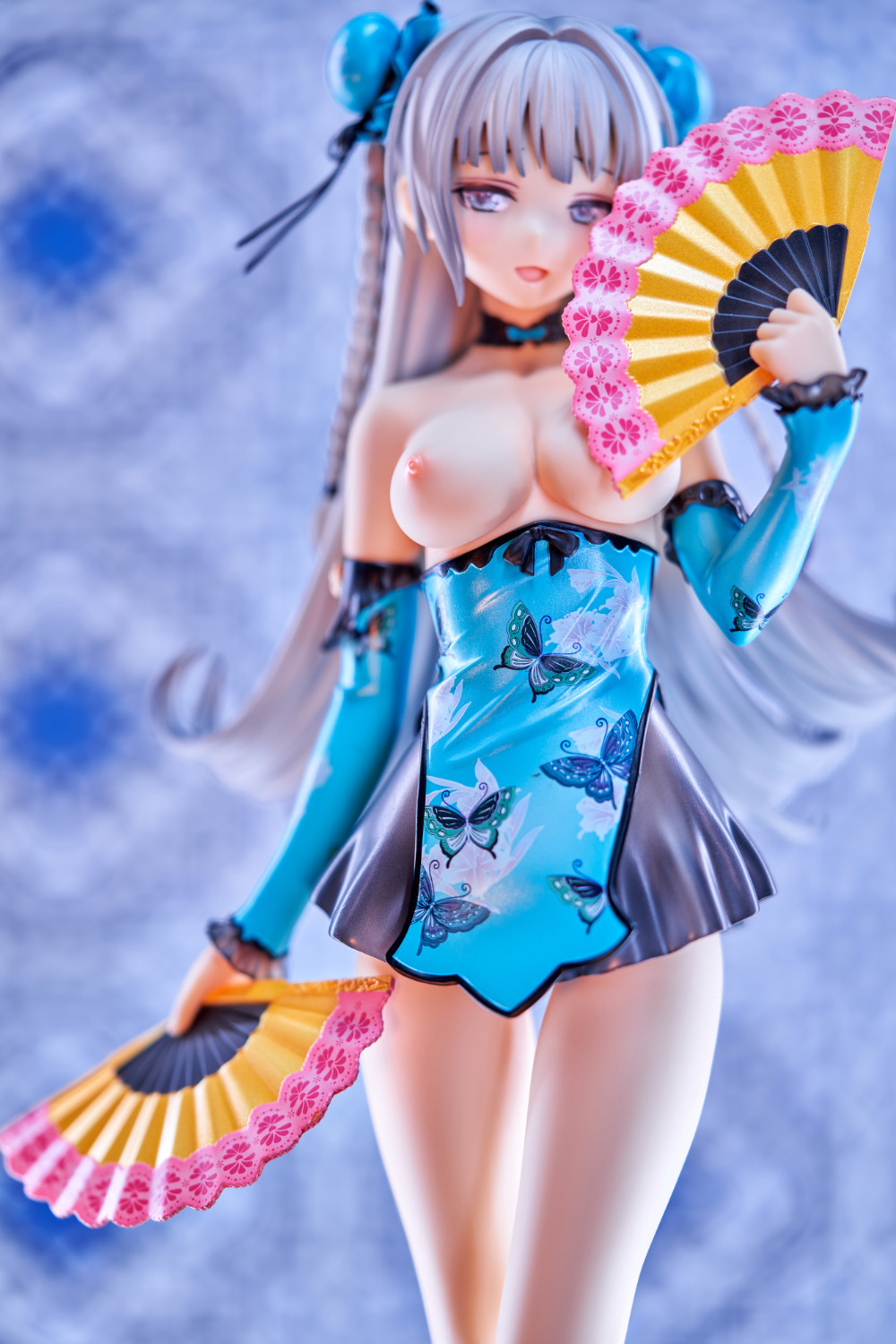 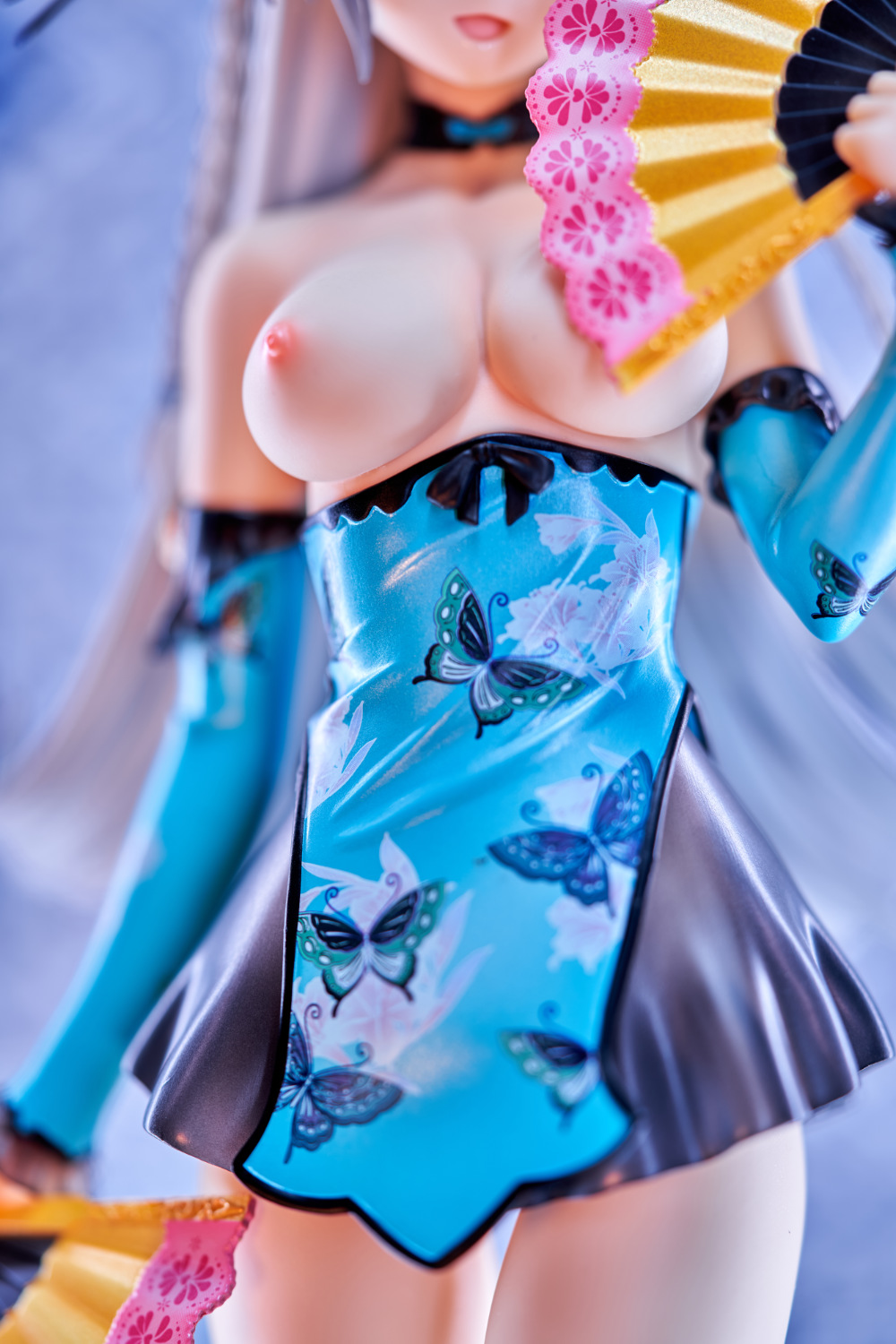 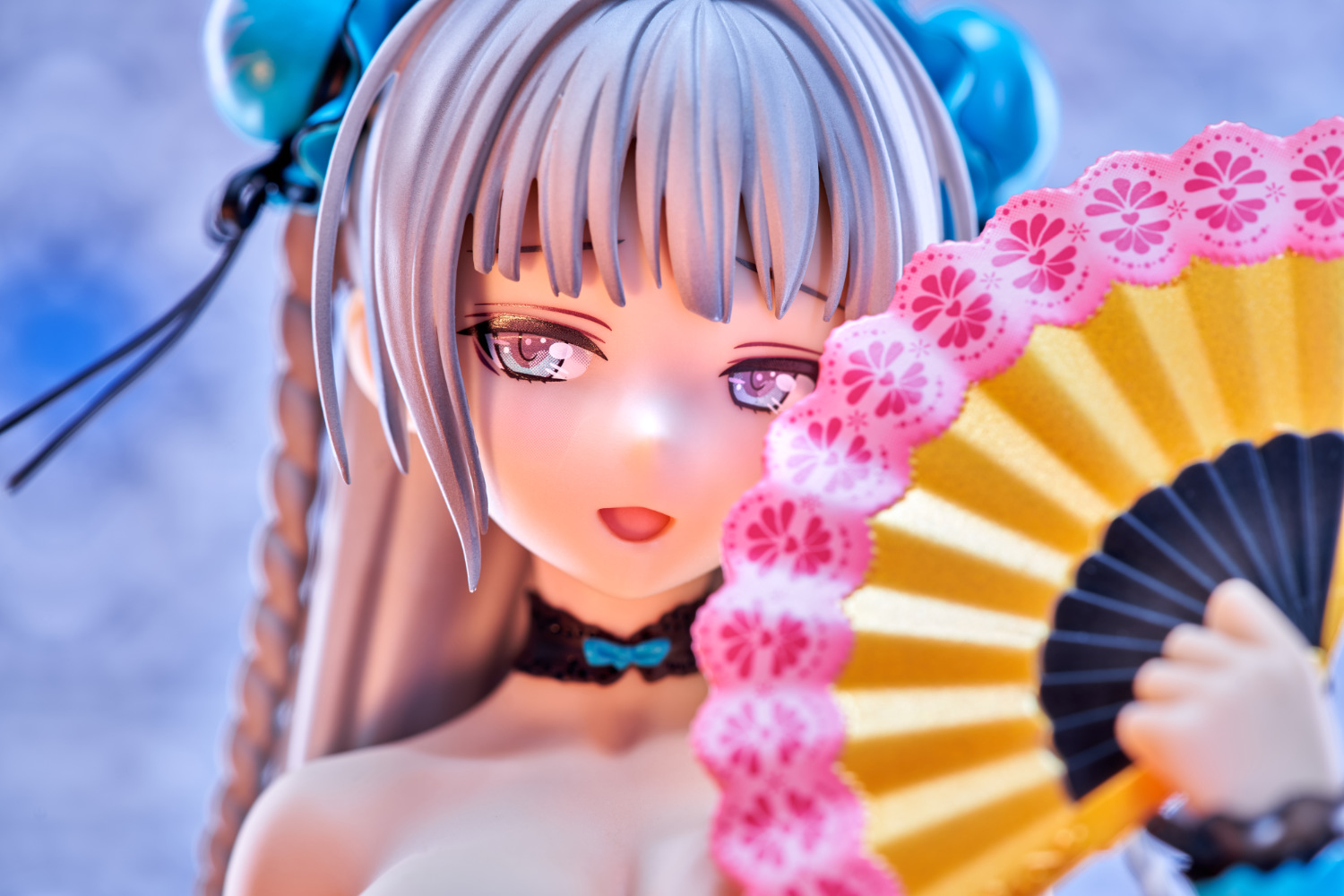 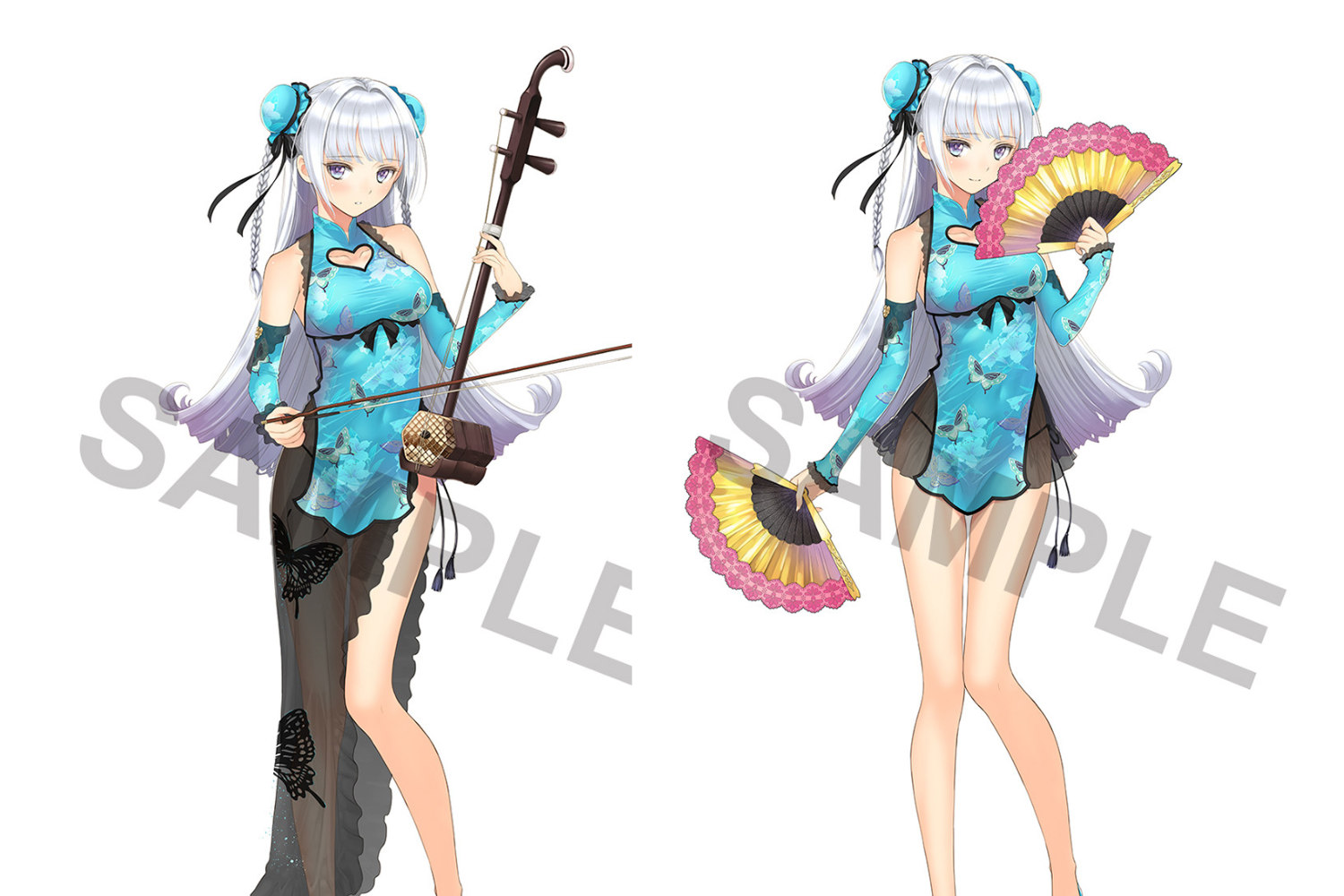